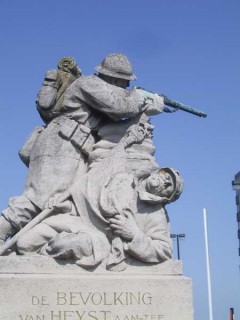 A statue of a soldier in full dress, with his rifle at the ready, crouched down behind a barricade of sandbags supported by a primitive wooden construction on a plinth. Next to him, there is a wounded soldier, still holding onto the regimental flag in his hands. On the other side, a life buoy with an oak and bay leaf garland around it. The entire statue is made of white stone. The statue refers to the trench war battle at the IJzer.

He was born in Liège and died in Ghent. When he had completed his military service, he started his sculptor studies at the Academy of Ghent. Here, he was taught by Louis-Pierre Van Briesbroeck.

In 1881, he participated in the Prize of Godecharle, unfortunately to no avail. He was granted a scholarship for the years 1881-1882 and 1882-1883. He travelled back and forth to Paris during 2 years. When he was studying at the 'École des beaux-Arts, he was also working in the workshop of Alexander Falguière creating the decoration for the Arc de triomphe de l' Étoille.

After that, he studied at the International Academy of Rome (1886-1892). He was offered several assignments after his studies, amongst others by the assignments. His work was strongly inspired by French art and the exotic.