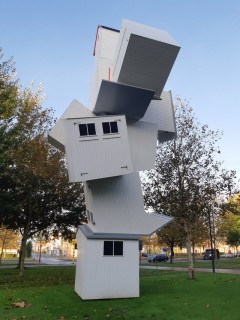 When entering Knokke-Heist by car, you are greeted by a tower created by Jean-François Fourtou.

The formation appears to be haphazard. It looks as if a tremendous gust of wind has lifted the cabins into the air and tossed them down again, stacking them in random order and leaving them there. Fourtou has been fascinated by architecture for many years. In previous works, he has used houses and interiors reminiscent of his childhood. He faithfully recreated them with surrealistic dimensions or turned them upside down. With their distinctive architecture and history, it is not surprising that the beach cabins attracted Fourtou’s attention.

Beach cabins are as old as Belgian tourism itself and were originally used as changing rooms for women. Nowadays, the dimensions and shapes are regulated by each coastal community. Most of the cabins you see along the Belgian coast can be seen in Fourtou’s sculpture. His work has been erected in a prominent location in the municipality, giving it the allure of a totem or emblem of this coastal community.

Since totems originally represented people from the community, the structure can be considered a monument to beach culture, a symbol of the unity of the beach culture along the entire coastline.