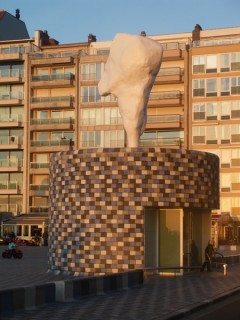 There are currently two cylinder-shaped buildings on the Rubensplein that function as pillars, on which the five meter tall heads of West rest. Those very physical heads, consisting of forms moulded out of primary mass, have something carnivalesque about them, as is found rather frequently in West‘s oeuvre.

They were made from a type of synthetic resin, a new material developed at the VUB that can withstand the severe maritime climate, the storms erosion by sand and the bright light.

He sculpts (or models) from abstract to figurative, and everything in between, in all sorts of materials, even papier-mâché. Besides catalogues, a few hundred reviews were published on his work.