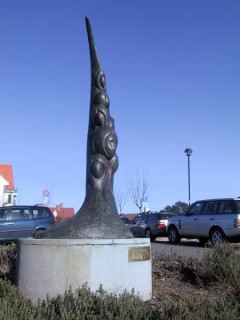 This stretched form –“bronze shrine” - , as the artist calls it, on which softly sculptured women figures with a vacuous look in their eyes clamp on to each other as they gradually jut out, can be compared with the “tree with heads” stemming from the primitive art.  Which incantation lies beneath, if one knows that it is dedicated to the ultramodern capital of Brazil.

The idea of returning to purity is confronted with the appearance of the shabby creatures, of that “paternoster of souls”, for powers that should be feared more than those of the jungle: the power of industry and money.

”Offerande aan Brasilia” (offering to Brazil) is an arch, or even, a vaulted tower. Like a bended trunk stemming from the jungle, she is the incarnation of civilisation, fighting against the increasingly larger group of the mechanisation, a civilisation trying to secure its own nature, Indian heirdom, right to mystery and right to life.

Painter, sculptor, musician and poet.  All his work radiates ‘cosmic and fantastic surrealism”. In all his works (paintings, sculptures, texts, music) we can detect a colourful, wavy, twisting and fluent composition.

His work is that of a seer who has rediscovered alchemy and has based his work on science.  Over 300 of his works can be found in museums and public institutions all over the world.

“I have always worked with the same ideal of hope.  In my eyes, an artist can be the one who cherishes the hearts and who brings them back to life, takes them with him, so that he might encounter happiness.”