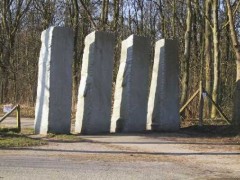 These four colossal blocks hewn from Austrian granitic rock, weighing about 48 ton, are the first realisation of the art project Statues in the City. Even though they are very monumental, they still form a unity with the surrounding nature.

The artwork of the German sculptor has the same effect on the spectator as the columns built by the Egyptians.

From 1959 until 1961, he worked as an apprentice and assistant stonemason in the restoration workshop of the Cologne Cathedral. As of 1962, he started to produce abstract sculptures in wood, steel and eventually only stone. He selects his own stones in quarries all over the world, where he tools the stones on the spot.

He does not have a workshop. Fascinated by minimal art, he concentrates on the essential characteristics of sculpturing (size, volume, material, tooling, space and place). His work mostly consists of stone blocks, first separated, and then reassembled into their basic form.

The visible holes and breaks are normal traces of the work process. The proportions are in accordance with mathematical principles and harmonise with the location.